Back-to-back champions in both leagues makes it tempting to think that the Sunday Night Eataly Bocce League and Monday Night Chop League were chalk from start to finish. There was no cruising to a second championship for del Bocce Vista or Snakes on a Lane. Comebacks, close calls and a lucky break or two were all part of the journey to the ‘ship. 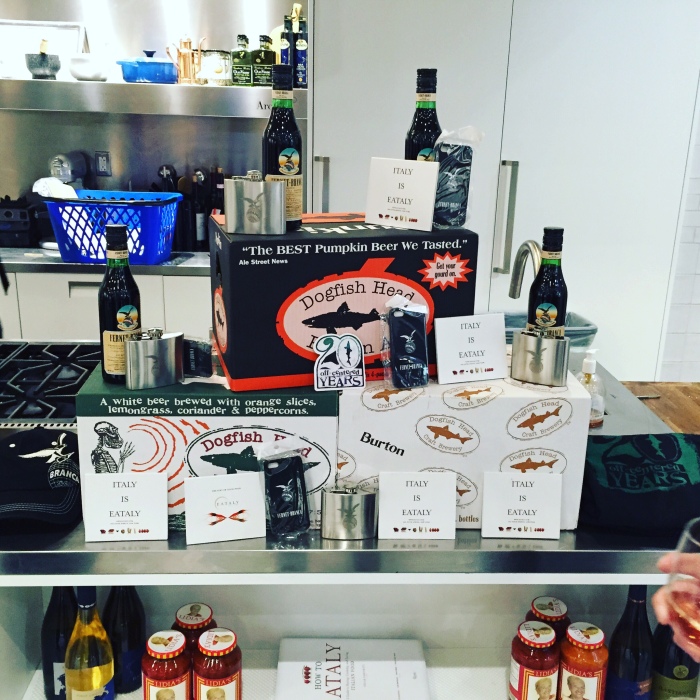 The prizes at stake for the Eataly playoffs.

Sunday night looked as if it would see the top two seeds, del Bocce Vista and Too Black, knocked out in the first round of the champions bracket. Forgetta Bocce looked formidable in the play-in game as they took down Invinciballs with relative ease and then took an early lead over an extra loose del Bocce Vista side.

Intrateam turmoil threatened to spoil the day for del Bocce Vista as Jeff “Teddy Bocce” Pfeiffer loudly and repeatedly asked why we awarded his teammate Aaron “Scorpion” Denning the season MVP before the playoffs. Forgetta Bocce was often on the cusp of scoring big points in frames, but a clutch shot from dBV or a Forgetta failing to deliver the crucial final balls kept the eventual champs in the game.

The early round upset that did come true saw former champions DMK defeat #2 seed and recent champions Too Black. Too Black team captain Rick Swanson let out an exhaustive “we sucked” after the game but the reality was that they just weren’t great, which is what it was going to take to defeat the gamers of DMK. Bringing a rook as a sub was the costliest move for Too Black. At this stage of American Bocce if you don’t come with your usual squad on playoff day, you’re bound to drizzown.

Ballz Deep brought their strongest combination of players to the playoffs with team captain Joe Morrison leading one side and the killer combo of John Vitale and Nick Myers opposite him. After dispatching the amazingly named Hot Shot Pt. 3: Tokyo Drift in the first round, Ballz Deep took it to del Bocce Vista early. They could not close it out, however, as del Bocce Vista tightened up their play and looked to be rounding into form as they prepared for the championship.

Perhaps iced a little too long after their big upset win in the first round, DMK found themselves in an early hole against Oxtail’s Army. Battling a foot injury all season, Oxtail ringer Visor Mike rose to the occasion and steadied the matchup with good throw after good throw. Unfortunately for DMK, whenever the often erratic Owen threw an OTB (Off the Board) ball, DMK’s strong duo of Rick and Primo weren’t able to capitalize. They played too tight in the middle of the round, settling for one point when more points were on the board. Finally, when a couple of Owen’s hammers did fall in the right place, Oxtail’s Army pulled away at the end and found themselves in the finals. 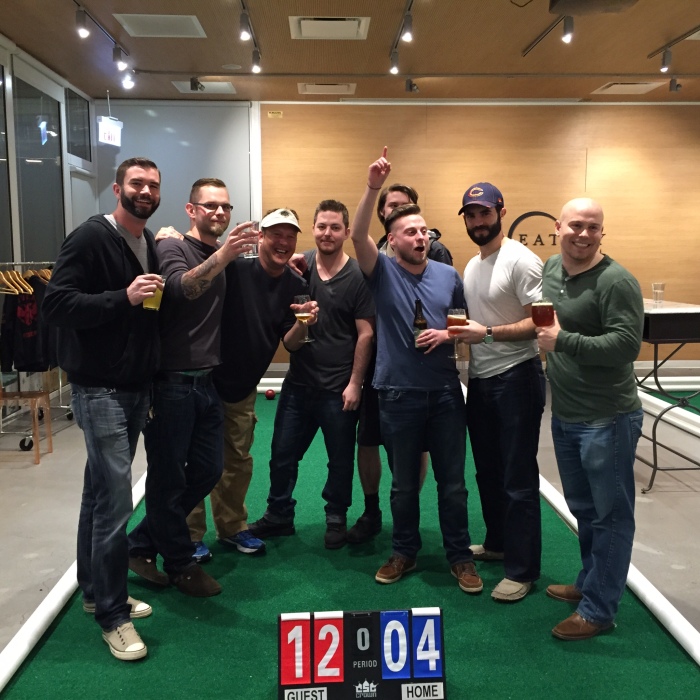 Everyone prepared for a showdown in the championship, but game one was a blow out as del Bocce Vista cruised to an easy win. Game two looked to be headed in the same direction, but team captain Austin “Oxtail” Smith decided his team wasn’t going out like that. With the score at 7-9 and the last ball of the frame in his hand, “Visor” Mike of Oxtail’s Army had a chance to give his team the lead with a good ball. He didn’t quite see it that way, though and said, “Well, we’re playing with house money,” before chucking the ball into the fray. When the balls all settled, it was 3 points and another championship for del Bocce Vista. 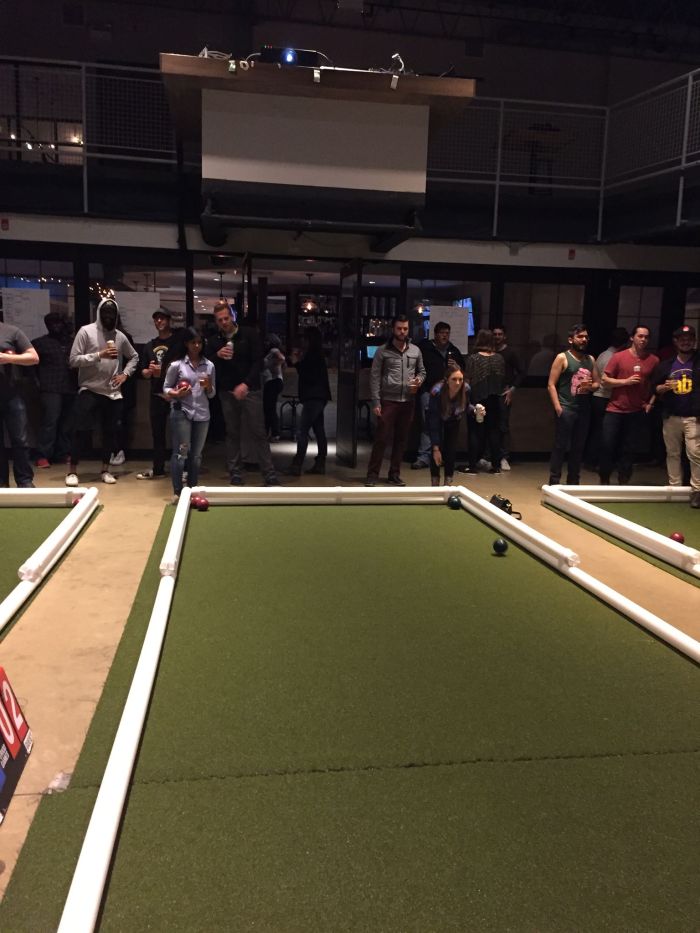 Early on in the Chop Shop playoff night. The place was packed an buzzing.

The drama started early on Monday night with excellent wild card games that eventually saw last season’s runners up and champions claw their way into the championship bracket. The Deboccery vs Wispy Danglers game started out rough with two pallino tosses going short of the halfway line. After two hot shots and a referee pallino throw to get the game going, they were off. Daniel Morrow held his own with only a few “that’s so Daniel” moments and the out of practice subsitute Dave “Fisherman’s Wharf” Sartoris did his best to keep up against veterans Erik Clarke and Marcus Johnson. Sarah Fanto and Chris Mathews couldn’t keep up with the casual yet spot on throws by Casey Henderson and Kate Smith. After two (three?) straight runner up finishes, the Danglers saw that elusive title in their sight as soon as they took down top seed Deboccery in this match up.

The second biggest comeback of the season was going down right beside the biggest upset of the season. Consequently, very few noticed the epic climb from a 9-2 hole that Bocce Has a Great Personality executed against Boccekawowwow. In the first round, Monica threw last with Personality up one ball. She edged the pallino into a sea of green balls and Personality found themselves down 0-3. On the very next round George did the same thing; kicking the pill into two more for the bad guys (they’re actually really, really good guys). Personality seemed to steady themselves with a 2 point frame but in the 4th frame George and Nick were unable to combat the curve of the court and allowed a casino to Kevin and Cam, one of the steadiest duos in all of bocce. And then the lights flickered, the speakers blew out (they actually did for about ten minutes) and Bocce Has a Great Personality played flawless bocce en route to a major comeback. Of course, Boccekawowow couldn’t have been classier in defeat and Personality set their sights on the Snakes.

Schweddy Balls narrowly missed the number one seed and as a result were pitted against Frankenstein’s Wet Dream in the first round of the playoffs. In the very first game of the season, Schweddy upset FWD and used that momentum to carry themselves to a hell of a sophomore season. Scott Sanville, FWD’s boisterous captain, licked his chops in the rematch and delivered great ball after great ball. This one just came down to experience as FWD effortlessly transitioned into playoff mode and Schweddy Balls came out perhaps a little too tight.

The biggest comeback in American Bocce history went down in the Early Bird semis as Frankenstein’s Wet Dream roared back from down 10-0 against Wispy Danglers. For the first 3 or 4 frames Marcus expertly moved the pallino into clusters of Danglers balls and  Kate and Casey matched every halo from Lydia and Scott with high-difficulty hammers. FWD was speechless. Scott then pleaded to Keith, “get me the pallino!” and after FWD finally got on the board, the game took a wild turn. A perfect kisser from Scott saw 4 Danglers balls soar past and all of a sudden it was 10-6. The Danglers aggressive style backfired as FWD conservatively crafted their way back for a 12-10 victory.

It’s worth noting that Bocce Has a Great Personality won convincingly in a matchup against Snakes on a Lane just a few weeks ago. But by the way Craig and Kyle were throwing for Snakes, you wouldn’t believe that Snakes has ever lost a game in their life. The game felt like (‘15) Brady and (‘13) Manning were taking snaps side by side and picking apart a defense in tandem. League MVP Nick and always-on-point George did their best to keep the game in control for a frame or two but when Snakes Scott and Dave caught up with their teammates the game ended in a blowout.

The most competitive season in American Bocce history culminated with a matchup between Snakes on a Lane and Frankenstein’s Wet Dream. Seven out of eight of the players have won at least one championship. These were the teams that we’re supposed to be there. Snakes continued their hot tosses and jumped out to a big lead early. But FWD had just come back from down 10-zip so by the 5th or 6th frame they kicked their games into the next gear. They battled from down 9-1 to get it to 9-7. In a back-and-forth frame between Kyle and Craig (who had reached NBA Jam “on fire” status by this point) and Keith and Ashley, the pallino popped out of a logjam and caromed off of the wall into a favorable position for the the Snakes. Two tosses later the game was over. 12-7 Snakes.

We wish we could say that the final game of the 2015 season was a better one. It wasn’t. It was a bloodbath. Keith, Ashley, and Lydia never got their spirits broken, congratulating each other after each shot and enjoying the moment, but Snakes all-business approach prevailed frame after frame. FWD captain Scott, who is as competitive as anyone in the league, must’ve felt that they reached the point of no return. He loosened his white-knuckled grip on the game and strategy and humbly watched as the Snakes slithered to a 12-1 victory. No drama here. No controversy. The better team prevailed. 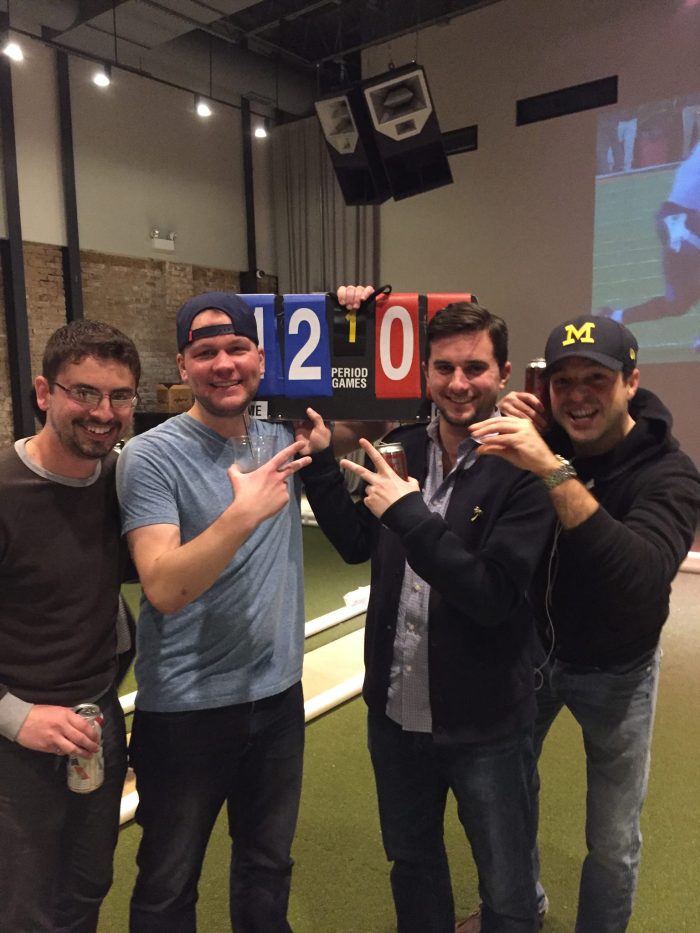 Back to back champs Snakes on a Lane: Kyle, Craig, Dave, and Scott (L to R)