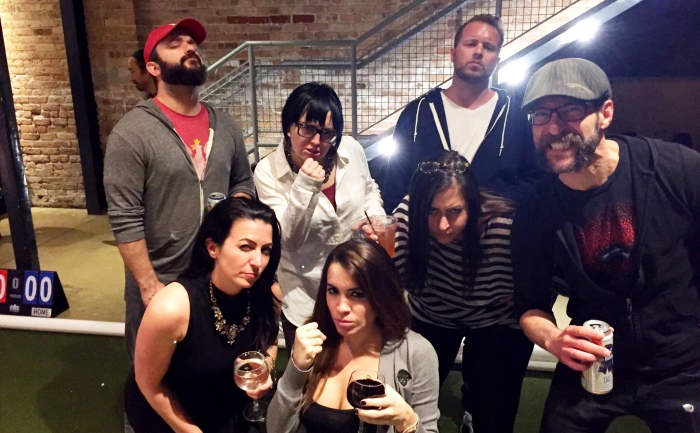 Halfway through the season and it’s starting to get real.

Who will play the most games this season?

Daniel and his curling locks are everywhere. He’s playing for his old team Deboccery when needed while fielding a new squad (Tripping Balls) and showing up on Tuesdays just in case a team needs a fourth. Thursday evening he was sitting at the Charlatan bar and asked what’s the story with the bocce nights at CH Distilling. “Cool, cool. Awlright, he and I’ll split a beer and then we’re gonna head up there. That okay?” Then there’s Scott. He comes early ($ games), stays late ($ games), has his team (D Balls), subs for anyone and refs the rest of the time. You cannot get that guy off the court. Elliott played for Boccekawowwow this week and is always ready to roll with another team. The list goes on. This community has so much to give at every level of involvement and it’s really great to see some people taking it to the max.

Let’s go ahead and say that there aren’t any big surprises when it comes to the 5-1 or better teams. Maybe Tonsil Bocce, but I tend to think that they’ve most likely mastered their three player rotation and it’s paying dividends. I do, however, think there are some teams who have been getting results below performance and expectation levels so far and will have a lot to say in the second half of the season. Bocceme Nae Nae is getting high grades on the eye test, but a series of tough loses (razor slim -3 point differential) have them at 1-5. I wouldn’t count any of the 3-3 teams stringing together a couple two win weeks to just into playoff position. Last, but not least, the recently awoken Malortron—Kurt, Benzer, Adam and (former MVP) Brandon—took down Bocce Has a Great Personality and seems to have shaken off the rust.

What’s in a Halo?

For those that don’t keep our various statistical categories at the forefront of their mind, a halo is a ball thrown within an inch (or so) of the pallino. It’s a statistical high-five for throwing a great stone. I’m starting to wonder if it is necessarily as great a stone as I once believed. You are all good-to-really good at bocce now. Each and every one of you. If you throw a halo to the side of the pallino, you’ve just given a good-to-really good bocce player a much bigger target to throw at and lessened the need for throwing it at just the right speed. One good toss knocks your ball off the pallino and leaves their ball in. If your halo is right in front of the pallino, it’s one shot to create space and then a lot of room to put the second shot in. If I’m playing a bocce master—Kendall, Spomer, Monty, etc.—then I might look to leave my ball a 6″-12″ off the pallino and dare them to get their speed right or risk flying past and hitting nothing.

Great shots abound in the Malortron vs. Bocce Has a Great Personality thriller.

Games of the Week Recap

Earl E. Bird: Tonsil Bocce jumped to a big, early lead over Menace II Bocce. Most of the heavy lifting was done by star duo Britt and Dan, though MIIB wasn’t going to pack up and head home. Joe (MIIB) took the game by the scruff of the neck for awhile, but the team depth of Tonsil Bocce eventually put the game to bed and took home the New Belgium beers.

Freaky Night: FoolHouse put in a solid effort and are moving in the right direction, but Hot Cheetos and Bocce had a dominant Webb performance complimented by the talkative Elliott and Fran duo and never trailed in the game. The ever-improving Jonathan and bright newcomer Megan kept the game competitive and look a likely pair to lead the team forward.

* Dan Brown (Tonsil Bocce + Mr. Boccedere appearance) 3-0 on the night with 28 balls-in, 5 bocces and 2 shots that drew a star next to his name.

Malortron (L to R: Yes, Kurt, Brandon and Benzer) celebrate a big week the only way they know how: Malort shots.