American Bocce Company has been on some ships recently. Big ships. Party ships. Cruise ships. Bocce on the high seas.

What’s that number? My money game winnings? No. Amount of Arnold Palmers that Alex drank on the cruise ships (they were small cups)? No. Facebook likes received from my picture holding a koala? No, but people sure loved that shit.

Wait. Who is holding who here?

That number is the cumulative miles traveled by American Bocce Co. in the month and a half from late January to early March. We’re talking planes, trains, buses, taxis, and the aforementioned cruise ships.

ABC embarked on two separate journeys introducing the game of bocce and innovative ways to play it on 6 ships disembarking from ports in Australia, New Zealand, Vanuatu, Papua New Guinea, Puerto Rico, and the good ol’ U.S. of A.

Alex Gara took a ride on two Carnival Cruise Line ships, the Pride and the Glory. These two ships were part of the “bocce pilot program” for CCL. The pilot being “will this go well?” and the program being “all ships get courts if it does. ”If these two pilots went well then the bocce on board would spread across the 24 ship fleet. Oh boy, did it go well. Carnival is now deciding which size court will fit on each respective ship. 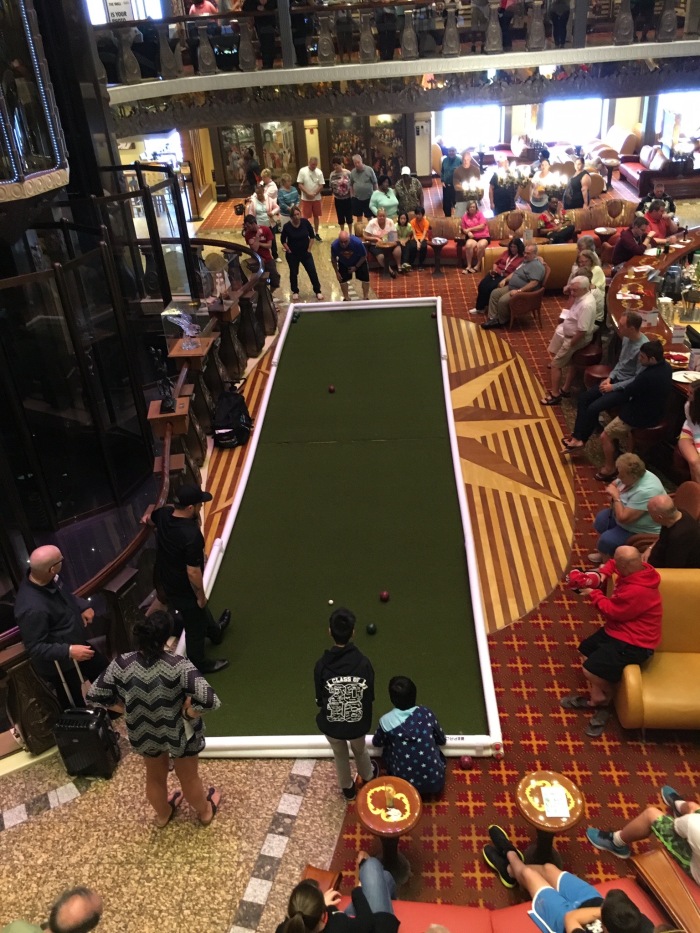 Ben Tudor traveled to the South Pacific where he boarded four P&O ships: Pacific Pearl, Pacific Jewel, Pacific Dawn and Pacific Aria. (P&O Cruises is owned by Carnival.) Bocce courts had already been purchased for this fleet, so instead of worrying about a pilot program, the focus was learning the cruise line business and P&O staff bocce ninja training.

All in all, some 120 crew members entered our bocce ninja training program. While not yet ninja level, they know bocce rules and gameplay, how to use the inflatable bocce equipment and how to run a kickass bocce event. Additionally, hundreds more passengers played or were active spectators howling oooohhhh’s and aaahhh’s for a perfect bocce or a near miss. 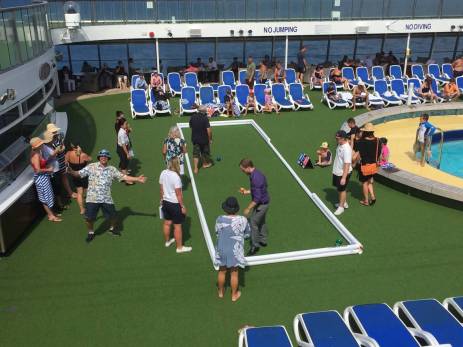 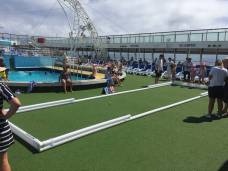 Most people in this region of the world have never even heard of bocce. You can’t even buy bocce balls in New Zealand. Look it up. The challenge became  teaching the game to staff members so they can confidently teach the game to passengers. Only then would a tournament blossom at happy hour and bocce flourish on board. And blossom it did, often leaving remarks of “the most fun we had on board” floating through the salty sea breeze.

You really can drink thirty six thousand Arnold Palmers if you want. You can eat that many burritos, too. The buffets feel never-ending and the grub is surprisingly good! In between bocce training sessions? EAT. Rainy day got ya down? EAT. Just finished your 4th mudslide? How are you hungry? But go ahead and fix yourself a plate—you’re on vacation! After a few days on the ship you find yourself mindlessly walking to the buffet when you have nothing else to do. It seemed to be the best cure for the occasional open sea boredom.

I guess one can’t only bocce.

After being on 4 cruise ships back-to-back you better believe I got a feel for the mid-ocean nightlife. Bianco parties got you dressed in all white. For the Nero party you drape yourself dark and mysteriously. Gatsby night? I can throw on a flapper dress and dance the Charleston in my sleep.

Being anywhere from 14 and 18 hours ahead of Chicago time made for an interesting look at the world as a whole. People wanted to know what the future looked like. Arranging any communication with friends and family back home was difficult. I watched the Super Bowl on a Monday afternoon, for Christ’s sake. 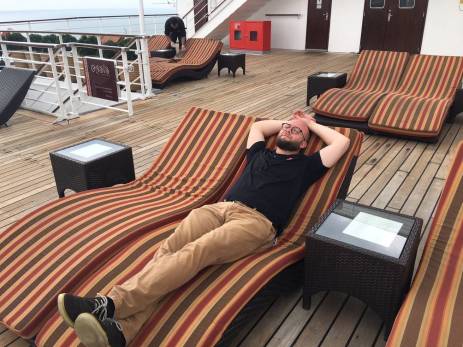 But it was summer down there! I left a 17 degree Chicago morning and landed 2 calendar days later to a 93 degree day in New Zealand. Caught a mean sunburn on my unsuspecting dome.  The ozone layer in the South Pacific is fiendishly thin.

I don’t want this part to be mistook for complaining, but if I am keepin’ it 100 about the cruise ship life, I must explain it all. The ship would get to rocking at times and you’d be thrown from one hallway wall to another and I was a sober “Benny Bobbles”. One ugly night when the sea was unusually angry, the ship was pummeled by 20+ foot swells. They nearly rolled me out of bed. Eventually you become used to it and your “sea legs” kick in at which point you feel like you’re on a boat even when you’re not. I felt this most often while standing at a urinal, a correlation that I am still unsure of.

Other than the turbulence, you are always aware, even if only in your subconscious that you are trapped on this ship. There are 100’s of miles, gazillions of gallons of water and some of the world’s meanest marine predators around you in every direction. There are lots of things on board to distract you of this reality but somewhere, deep down, it’s always there in your head.  Pecking at you. Let’s just say, for an inland raised boy, countryside on the horizon was always a very welcome sight.

Standing on a soap box filled with cheese.

I’ma get cheesy for a moment (surprise!).

This was the most amazing journey I ever experienced. Once in a lifetime may be cliché but it is true. Someone told me before I left that international and intercultural travel should change you. It did. A lot. And I think I may still not be fully turned into the person that this experience will ultimately leave me. I witnessed natural beauty. I met people from all over the world and saw and heard a way of life much different from mine. I answered questions again and again with “I don’t know how Donald Trump has got this far in the race”.

I also saw truly tough ways of life in Vanuatu, Papua New Guinea and Fiji—places where fresh water, food, and any signs of the civilization I have come to take for granted, were not a guarantee. It was 114 degrees in Vanuatu. Air conditioning? Forget about it. In Fiji, having just been devastated by a cyclone, I met a man who calmly asked me if I’d like to buy a bracelet from him in an effort to raise money to replace the roof on his house that had been blown off the day before. He took me into his small shop, asked me take off my shoes, and sat me down for a Kava tea ceremony. Needless to say, I bought the bracelet—it was beautiful and it made a lovely gift for my sister. 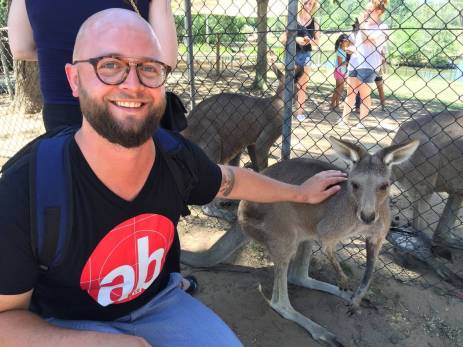 So here’s what I left these places thinking: I have it really, really good. Do I work hard every day to get more? Make more money? Yea, I do.  But being in these places made me once again realize how lucky I am to have been born where I was and be able to live the life I do.

And lastly, while on my cheese filled soapbox, it was a truly beautiful experience to introduce the game I think about more than anything else in the world to a group of people that had never played it before. Goosebumps just attacked my neck as I wrote that. On paper, does teaching bocce to passengers on a cruise ship sound like it is going to make the smallest ripple in the world? No? And it may not have. But to watch the game I love so dearly bring families together, give a double amputee an activity he could really get into, and let a mother beat her grown son while dancing in his slightly embarrassed face made me happy…and proud.

Check out the journey by clicking on the words below these words!

Pictures and map of travels